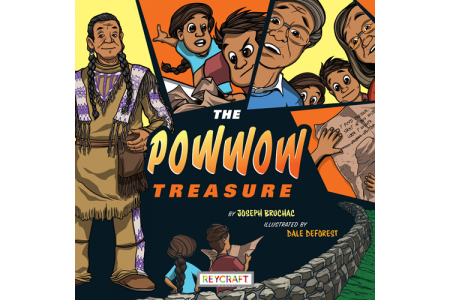 I’m a writer and traditional storyteller. An enrolled member of the Nulhegan Band of the Abenaki Nation, I’ve performed as a storyteller and sold books and my own crafts at northeastern powwows since the early 1980s. My family and I run the annual Saratoga Native American Festival in Saratoga Springs, New York. One of my favorite powwow memories is when I was honored with a blanket at the Shelburne Museum powwow in Vermont twenty years ago.

I was born in Tuba City, Arizona, but raised on the Navajo Reservation in northwestern New Mexico. My mother says I’ve been an illustrator since I was able to hold a crayon.
I used to lie on my back and draw pictures under the coffee table in my parents’ living room. Apart from being an illustrator, I’m a storyteller, graphic designer, and musician.
I reside in Albuquerque, New Mexico, and am a happily married father of two. Anything and everything I do, I do for my loved ones. The ultimate goal of my career is to do what I do, from the comfort of my home. Several of the characters depicted in this adorable story were inspired by loved ones in my own life, namely my mother, sister, and brother.