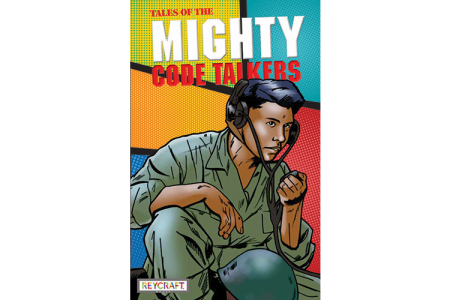 Edited by Arigon Starr, who is an enrolled member of the Kickapoo Tribe of Oklahoma, and a multitalented and award-winning musician, actor, playwright, and artist.

Over the last few decades, as multicultural studies have taken on new importance in American society, many previously overlooked contributions to our history by various minorities have come to light. Among these have been stories of the military patriotism exhibited by Native Americans, dating as far back as the American Revolution.

This young adult graphic novel, edited by Starr, features the talents of six Native American writers and artists. In varying styles, they tell three stories about the famed code talkers of World Wars I and II, soldiers who used their own native languages to relay messages in codes that were never broken by the enemy. Additional historic information about the code talkers is included after the stories.

The code talkers’ heroic stories have been told, belatedly, to adult readers, but this graphic novel may be the first to tell their stories to a younger audience. Richly illustrated, and with text that sometimes verges on the poetic, the novel should be included in any multicultural library designed for young readers.

When people think of code talkers they likely think of the Navajo in World War II. And that’s for good reason. The U.S. Marine Corps recruited more than 400 Navajo to be code talkers in 1941 and 1942 during the war – the original group numbered about 30. Their skill would also be used in the Korean and Vietnam Wars as well. But the Navajo weren’t the only ones and they weren’t the first. There were code talkers from at least 16 tribes who served in the Marines, Army and Navy. In addition to the Navajo, the list includes Seminole, Assiniboine, Cherokee, Choctaw, Comanche, Hopi, Lakota and Meskwaki. The Cherokee were the first code talkers in World War I and they paved the way for those who came after, like the Choctaw (WWI) and Navajo (WWII). Their stories are a central focus of the recently published book “Tales of the Mighty Code Talker.” The publication, by Reycraft Books, came out last year and is designed for younger readers and students.

“Tales of the Mighty Code Talker” takes the reader along with different Native American characters who are going through varied scenarios during the wars. The book is presented in a sleek, comic book-style that appeals to the younger set, although adults would enjoy it as well.