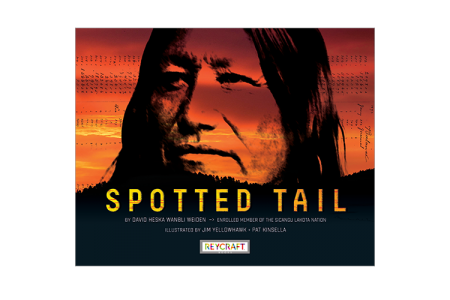 Skip to the beginning of the images gallery
Awards

The Children’s Book Committee strives to guide librarians, educators, parents, grandparents, and other interested adults to the best books for children published each year.

Founded in 1953, Western Writers of America annually honors distinguished writing about the American West with the Spur Awards.

David Heska Wanbli Weiden lives in Denver, Colorado, and is the father of two amazing sons, David and Sasha. He’s a citizen of the Sicangu Lakota nation and teaches Native American Studies classes at Metropolitan State University of Denver. His spirit name, Heska Wanbli, means “mountain eagle.” He writes books for children and for adults, and reading is his favorite thing in the world, except for spending time with his kids.

Jim Yellowhawk grew up on the Cheyenne River Reservation in South Dakota. He is an enrolled member of the Itazipco Band of the Cheyenne River Sioux Tribe, and he is also Onodoga/Iroquois on his mother’s side. He has been immersed in the arts of his ancestors since he was a young boy. Pat Kinsella is a Brooklyn-based illustrator with a B.F.A. in printmaking from the Tyler School of Art in Philadelphia, and an M.F.A. in illustration from the School of Visual Arts in NYC.

Nineteenth-century Sicangu Lakota leader Spotted Tail (Sinte Gleska) is the subject of a new biography for middle grades, by David Heska Wanbli Weiden (Spotted Tail, Reycraft Books, 2019). Spotted Tail was highly influential, but is generally less well-known than other Plains leaders of his time such as Crazy Horse and Sitting Bull.

The book's four sections or chapters -- Early Years, Warrior, Family Life, and The Chief -- are followed by two pages that explain some Lakota customs, and 2 pages appropriately titled "A Short History of the Lakota People." (It's very short.)

This story of Spotted Tail's life opens with a description of his participation, as a boy, in a buffalo hunt. It ends with a brief account of his 1881 murder and its eventual repercussions for Indian law, and some paragraphs...

Throughout this detailed biography of Spotted Tail (1823–1881), debut author Weiden links conflicts from the Lakota warrior and mediator’s time to the present day. With remarkable bravery, Spotted Tail fought against the U.S. Army; after time in prison, where he learned English, he became a skilled negotiator. Weiden describes the lawsuit that emerged from the U.S. government’s theft of the Black Hills, sacred to the Lakota people, after gold was found there. Spotted Tail’s people were given a cash settlement, which their honor would not let them touch: “Currently,” Weiden concludes, “the money sits in a bank account.” After the subject’s children were promised an excellent education in a white-run school, he discovered that, in reality, they were being trained as menial laborers: “It wasn’t until 1978 that American Indian parents were given the right to stop their children from being taken to these schools.” Mixed-media artwork combines crisp photographs of Native land with art by Yellowhawk, including portraits and battle scenes done in the style of earlier Native art, painted on leaves from white settlers’ accounting ledgers. Ages 9–up (October 2019)