Many people know the story of Dolley Madison, one of the first First Ladies to live in the White House, and how she saved the famous painting of George Washington as the British attacked and burned Washington, D. C. But few know what happened next. With the U.S. soldiers in retreat and Dolley fleeing, what drove the British soldiers out of the city they were intent on destroying? Was it really a tornado? Or was it something else? 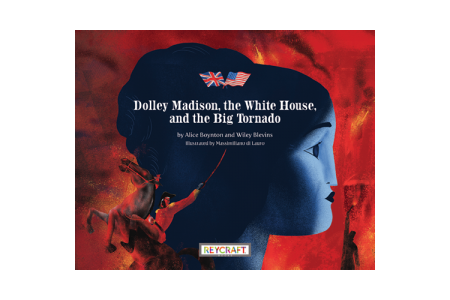 ★ “Boynton and Blevins chronicle the events preceding and immediately following Dolley Madison’s famous rescue of George Washington’s portrait from the burning of the White House. The book opens at dawn on August 24, 1814, as the British prepare to launch their attack on Washington, DC. When it becomes clear that it is no longer safe to remain in the White House, Madison orders the painting be removed for safekeeping. What follows is the destruction of the country’s capital, and ultimately, a violent thunderstorm that limits the spread of the flames. Alternating spreads offer the perspective of the Americans in the city, followed by the British army. Di Lauro’s striking illustrations portray the American point of view primarily in shades of blue, while the British outlook is a variety of reds…Viewpoints range from Dolley Madison to an American soldier, a British lieutenant, and a young enslaved boy, to name a few. Back matter includes further information about notable figures seen throughout the book as well as facts about the time period. VERDICT A stunningly illustrated exploration of a notable historical event, this is a timely and excellent addition to historical collections.” –School Library Journal Starred Review